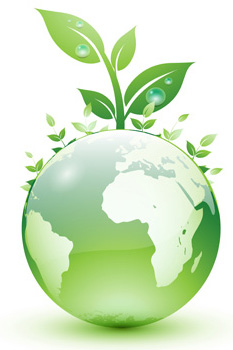 In today’s world, there is more attention being paid to caring for our environment, and a greater understanding of the importance of doing so. EarthSafe Technology indicates the use of a green technology that is natural and does not harm the environment, and also has other benefits, such as saving energy and reducing use of chemicals. EarthSafe helps businesses become “green”, allowing them to appeal to a larger target audience and position themselves as sustainable.

Energy use is costly, both financially and environmentally. Ozone is a cold-water wash system, which means it is environmentally friendly and significantly more cost effective. Since ozone is produced on-demand, and on-site, the cost of transporting chemicals and carbon footprint are eliminated.

The World Health Organization believes that shortages of fresh water threaten the lives and safety of over 2.4 billion people worldwide. Ozone is playing an increasing role in saving fresh water by enabling the continual reuse of this vital natural resource without the unhealthy chemicals historically used for water disinfection. Ozone enables the recycling and reuse of water in a broad array of industrial and commercial applications including industrial waste water, process cooling water, and even car washes.

Ozone also has a long history of effectively and safely maintaining water quality in zoos, aquariums, and fish farms where its use is essential for maintaining healthy marine habitats. Airborne ozone is also playing an increasingly important role in microbe control associated with food preservation, especially in the organic foods sector.

Ozone is beginning to replace hazardous chemicals traditionally utilized for sanitation by food processing, beverage, pharmaceutical and medical companies. Ozone now impacts much of what we consume including drinking water, wine, beer, soft drinks, seafood, meat, poultry, fresh fruits and vegetables. Ozone is being used to keep beverages and foods safer and fresher while reducing use of chemicals in plant run-off, protecting existing ground water quality.